Archive for the ‘Uncategorized’ Category

The Ego Can Blind Us

My Wife Hardly Mucks Up

My friend Jeffrey Schwartz M.D. who advised Leonardo DiCaprio in The Aviator (2004) and I worked on the emotional color wheel that was used in the following scene of The Mindfulness Movie. Fred Alan Wolf, physicist, who starred in the runaway hit The Secret and What The Bleep Do We Know!? describes the colors of I. (click the image below to watch).

Separating awareness from emotional attachment is very difﬁcult, it can be done with practice. We do this by changing the autopilot loop of mindlessness to mindfulness. 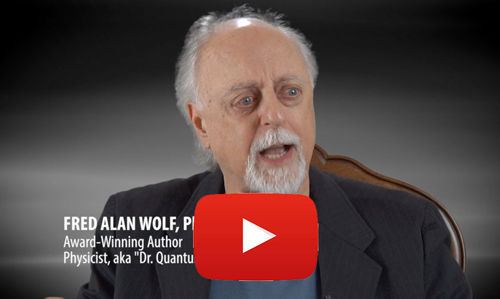 Anxious About Dying? Beyond Mindfulness

There’s a very enlightening scene in Star Trek IV: The Voyage Home (1986) between McCoy (the Doc) and Spock. In the previous film, Spock had died and then was mysteriously regenerated by a device called Genesis. It was detonated on the planet where Spock was buried. McCoy is curious and wants to share Spock’s experience of death, here’s the scene:

McCoy: Perhaps, we could cover a little philosophical ground. Life.

McCoy: Things of that nature.

Spock: I did not have time on Vulcan to review the philosophical disciplines.

McCoy: C’mon, Spock, it’s me, McCoy. You really have gone where no man’s gone before. Can’t you tell me what it felt like?

Spock: It would be impossible to discuss the subject without a common frame-of-reference.

Spock: A joke is a story with a humorous climax.

McCoy: You mean I have to die to discuss your insights on death?

Spock: Forgive me, Doctor. I am receiving a number of distress calls.

McCoy [Grinning]: I don’t doubt it.

I think McCoy was referring to distress calls happening inside of SpockFunny, those two never stop bantering!

They have the same problem trying to explain their death experience as Spock had explaining his to McCoy: it is impossible to explain without a common frame-of-reference. If we are able to switch our perspective into one that is less ego driven and more “other” driven, the problem becomes easier to solve.

For instance, if your fear of death is driven by all the unresolved conditions you will leave behind that you’ve become deeply attached to—like a partner, children, business, financial planning for family, bucket list, and so on,—then the fear is ego driven, and roots are in attachments and expectations. We know deep down that we can overcome them with a change of our frame-of-reference.

We also know partners will either find other partners or happiness in living alone. Children will be loved by others and create a life of their own. A businesses can sustain itself if it’s a viable one. And financial planning for the family can be resolved with a life insurance policy. As for the proverbial bucket list, start now! Get some of those items ticked off the list. And if you don’t get to them all, then only you will know.

Perhaps you may want to add one more to the bucket list:

The change of perspective is written about in the Tao Te Ching, written by Lao Tzu, translated more frequently than any other book except the Bible:

“All things return to the One. What does the One return to?”

In that one sentence, the entirety of the circle of birth and death are defined. It is especially frightening for our egos to consider that it may end one day. Consider this metaphor: say that the universe is one big ocean of water. Within your ego frame-of-reference, you think of yourself as a drop in that ocean. But—in reality—we are not really a drop, if the universe is filled with water. There is nowhere for a drop to form. Right? It is only through our ego illusion that a drop can exist. Otherwise, it’s just an ocean of water—one body of water.

In other words, our ego creates an illusion of identity and simply separates us from everything else. If we realize that we are not separate drops of water and we are the ocean—in a universal sense—then we do not need to nearly die in order to stop fearing death. Thus, change our frame-of-reference.

Again, let’s imagine—if you will—our awareness
is like the ocean. It is everywhere in the universe. Imagine it is everywhere so the universe can sustain itself and continually recreate itself, like a fabric of particles. If we were all separate beings, we would have a dualistic reality. Science, including the latest discovery of the god particle (Higgs Particle), is telling us that the universe is non-dualistic. Every physicist agrees that there are no separate things, only interdependence and codependence amoung sub-atomic particles wrapped in a Higgs fabric, if you will.

We are all the ocean, even when we die.

Back to awareness, The Pali Canon is one of the ancient collections on which Theravada Buddhism is based. It says that “even in dying the last in-breaths and out-breaths will pass consciously, not unconsciously,” which refers to mindfulness at the time of dying. Mindfulness allows us to experience a change of perspective through awareness. At some point, awareness of the ocean becomes the common frame-of-reference which Spock mentions..

When you are no longer the drop, you can understand the following from the perspective of the ocean:

He who knows how to live can walk abroad

Without fear of rhinoceros or tiger.

He will not be wounded in battle.

For in him rhinoceros can find no place to thrust their horn,

Tigers no place to use their claws,

And weapons no place to pierce.

Why is this so?

Because he has no place for death to enter. [Tao Te Ching]

Change your frame-of-reference to indentify with your awareness, not your ego. And while your ego may die, there will be no place for death to enter!

Mindfulness and Attachment, Sex, and Love

Remember the Ten Paradoxes, well here’s another side to Paradox 8: With attachment, work. Without attachment, play.

The most common meaning is unhealthful stress and attachment makes everything hard work and sometimes really difficult! When attachments are healthy; it’s really no hard work at all, time flies, and we can learn to play again with those we love, work with, friends, and others in our lives.

… “the place where attachment and stress overlap: distressed relationships. In the previous chapter I mentioned John Gottman’s stories from women in abusive relationships, who said that some of the best sex followed immediately after acts of violence, and Isabel in What Do Women Want?, who craved sex with a commitment-phobic ex but lacked desire for her awesome current boyfriend.

Both of these puzzles make perfect sense when we understand attachment-driven sex when the attachment is threatened. Attachment is about survival; relationships are about survival. When they are threatened, we do whatever it takes to hold on to them, because there are no higher stakes than our connection with our attachment objects.

I’ll illustrate this idea with some of the darkest and most disturbing science I’ve ever read— it’s disturbing precisely because it shows us how powerfully attachment affects the emotional wellbeing of mammals like us. In Harry Harlow’s series of “monster mother” studies, conducted in the middle of the twentieth century, his research team invented mechanical “mothers,” to which infant rhesus monkeys attached.

Once the infants were emotionally attached to the monster mothers, the mechanical devices shook the infants, spiked them, or jetted cold air onto them, to force the babies away. And what did the infant monkeys do when their “mothers” treated them badly, shook them off, rejected them?

They ran back to their mothers.” **

What do you keep running back to? Be mindful of it and you can change it.

Mindfulness requires that you “become aware of the patterns, whether of thought or behavior, and then that you develop skills to replace those patterns with new ones. Allow yourself to feel those old feelings, but now, instead of engaging in the habitual self-defensive patterns, begin practicing new patterns.” **

10 mindfulness habits that will make you more productive at work

Beyond being an increasingly popular practice for top executives and celebrities, mindfulness meditation is scientifically proven to increase memory and awareness and reduce stress and negative thinking.

Even if you’re not ready to make a commitment to a Transcendental Meditation group or your local yoga studio, there are some simple daily habits that can make you more productive and happier at work, say Learn Mindfulness founder Shamash Alidina and Mindfulnet.org founder Juliet Adams.

They’ve gathered 10 easy practices from their book “Mindfulness at Work For Dummies” into the following presentation.